Checking out the Yonghe Temple, Beijing

Located in the Dongcheng district of Beijing (north-east of the city centre), is the amazing Yonghe Temple otherwise known as the Lama temple and is also a monastery for dedicated to Tibetan Buddhism. With its combination of Han Chinese and Tibetan styles in its design and a few hidden secrets, here is why I think visitors to Beijing should check out the Yonghe temple.

Some information before visiting the temple

The temple is very easy to reach and isn’t far from the city centre. The easiest way is by the Beijing subway system and arriving at the nearby station known as Yonghegong on either lines 2 and 5 and then taking a short walk south to the temple which is located on the left hand side of Yonghegong street. A small fee is to be paid and there are notices on what to do and not to do which are kindly to be observed.

The main entrance is on the southern end of the complex and I had to walk northwards to reach the five main halls which make up the temple. Between the main halls are separated by small courtyards with one tree and a lot of incense burning in the air where people are lighting candle sticks and praying to entrances of the main hall.

The first hall I came across was the Hall of the Heavenly Kings which used to be the main entrance to the monastery. Standing in the heart of this hall is the Buddhist statue of the Maitreya and to the sides are statues of the Four Heavenly Kings. To be honest (as I am not a Buddhist), I just love the way the statues are designed, built and put into place within peaceful surroundings. Walking around I could feel the eyes of the statues looking at me, they were so real.

Looking to hike the Great Wall of China with a guide for the day? Check out how I did it here!

The second hall (which is also the main and largest building of the temple) is the Hall of Harmony and Peace. Here there is a statue of the Gautama Buddha (the Buddha of the Present) in the centre whilst to the left is another Maitreya Buddha statue (Buddha of the Future) and to the right is the Kasyapa Matanga (Buddha of the Past). These statues are otherwise known as the Buddhas of the Three Ages and are all made out of bronze.

Beyond that is the third hall and to be honest at the time, didn’t know what this hall was all about. After research, I found out that this was the Hall of Everlasting Protection and was the living quarters to Emperor Yongzheng when he was a prince. It was also here where his coffin was placed after his death. There is some information inside about this but even then I didn’t really truly understand. Also in the centre there is a statue of the Bhaisajya-Guru (The Buddha of Healing).

The fourth hall is the Hall of the Wheel of the Law (sounds like a sitcom for an American television series), this is the place for conducting religious ceremonies and reading scriptures. Another nice temple to look at but it is the final hall which blew my mind away.

The Pavilion of Ten Thousand Happinesses is something which I will take a lot of memories away with me. The hall has a 18 metre tall statue (with an extra 8 metres underground so the total height is 26m) of the Maitreya Buddha which is carved from a single piece of White Sandalwood and because of this has made it into the Guinness Book of Records. Seriously, this blew my mind away, this is one of the most beautiful statues I have come across on my travels and this is not to be missed.

The Yonghe Temple like I said is not to be missed. There is a lot of beautiful artwork and sculptures here and totally recommend a visit here which can last up to two hours. It was also nice to get away from the busy streets and to walk inside this peaceful temple, to have a moment to myself, to refresh and reflect and take in the beauty of the Buddhist religion.

Getting a Chinese visa with easy way with iVisa –  Are you a British citizen (or any other country of the world) looking to apply for a Chinese visa without the hassle of embassies etc and really get to see the Yonghe Temple up close? I have teamed up with iVisa, one of the top companies in the world which provides Chinese and other nations visa. Check out my blog post to have a look on how to do this and apply! 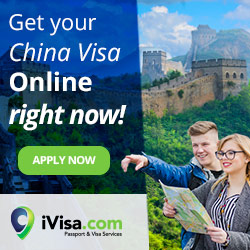 Hi there! I’m Danik from Stevenage, UK, passionate about traveling the world and showing others good insights on places traveled. I have a love for France, Canada and Latvia.

As well as a blogger, I am also a travel agent based in the UK who has ABTA protection. Check out my link at the top of the page to book your next travel today.